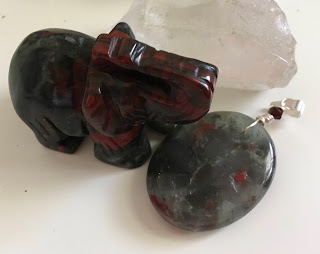 In order to keep learning about one of my favorite subjects, and with your supportive questions, I will be writing about birthstones each month. This month, March there are two birthstones, Bloodstone or Heliotrope is up first.

In the picture above you will see an elephant carves from bloodstone and a large oval pendant. There is more information below and a video! Let me know what you think of bloodstone and how it makes you feel when you look at it.

The mineral aggregate heliotrope, also known as bloodstone, is a cryptocrystalline mixture of quartz that occurs mostly as jasper or sometimes as chalcedony. The ‘classic’ bloodstone is opaque green jasper with red inclusions of hematite. The red inclusions may resemble spots of blood.

Heliotrope was called "stone of Babylon" by Albertus Magnus and he referred to several magical properties, which were attributed to it from Late Antiquity.

Pliny the Elder (1st century) mentioned first that the magicians used it as a stone of invisibility. Damigeron (4th century) wrote about its property to make rain, solar eclipse and its special virtue in divination and preserving health and youth.

A Christian tradition states that the red spots come from blood falling upon the stone during the crucifixion of Jesus, as he was stabbed in the side by a Roman soldier.

Ancient Roman soldiers believed that the stone had the ability to slow bleeding and wore it for this reason.

In India it is held that one can staunch the bleeding by placing upon wounds and injuries after dipping it in cold water, which may have a scientific basis in the fact that iron oxide, contained in the stone, is an effective astringent.

The Gnostics wore the stone as an amulet for longevity, for wealth and courage, to strengthen the stomach, and to dispel melancholy.

In the Middle Ages it was considered useful for animal husbandry.

The ancient Greeks and Romans wore the stone to bring renown and favor, to bring endurance, and as a charm against the bite of venomous creatures. Greek and Roman athletes favored it as talisman for success in their games. – Wikipedia

Bloodstone is referred to as the warrior stone because of the red specks of hematite in it. The red specks are the blood a warrior sheds.

Percival was a knight of Arthurs round table who went on a quest for the holy grail. Percival was a knight trained in the physical aspects of combat, but his quest took him into the spiritual realms, teaching him about lessons of illusion and the power of unconditional love. Meditation with bloodstone helps with embarking on any new venture as it brings the energy of the heart into balance with the energy of acton.

Red is the color of the root chakra, symbolizing action, physical strength, vitality, the power to make things happen in the world we live in.

Green in the stone links up to the heart chakra and expansion into love.

Bloodstone assist us with the courage we need to take those steps forward into the unknown and to honor and love the choices we are making.

Crystal layout – place the bloodstone over the heart, clear quartz on the third eye, smokey quartz at the feet. This layout will help center and stabilize you, to open a pathway to receive visions that open you to new life experiences.

Have a wonderful week! Keep your Heart open and aligned with the energy of LOVE! 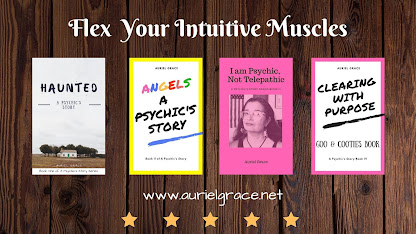