What this site offers -

entrance into the Earth’s Heart Chakra

Understanding of the vast cycles of time

Acceptance of change and evolution

There are several sacred sites within the town of Glastonbury. We are going to talk about each one.

Glastonbury has been inhabited since neolithic times, a time when people started being more domestic, farming, less hunter gathering. They are creating home and community at this time.

The Abbey was founded in the 8th century and enlarged in the 10th. It was destroyed by a major fire in 1184, rebuilt, by the 14 century Glastonbury is one of the richest and most powerful monasteries in England.

The Abbey was suppressed during the Dissolution of the Monasteries under King Henry VIII of England.

Through out history Glastonbury has been associated with the King Arthur and Avalon legend. King Arthur & Queen Guinevere’s burial place is supposed to be at the Abbey - Historians believe the monks did this to bring in more money to the Abbey. In legend, Arthur is taken to Avalon and Guinevere went to a convent at the end of that story.

The Once & Future King  - TH White

Christian legends have Joseph of Arimathea founding the Abbey in the 1st Century.

The Holy Grail - the cup used at the Last Supper with Jesus and the Apostles. Joseph of Arimethea brought the cup with him from Jerusalem. According to legend Joseph founded Glastonbury Abbey. He created a zodiac patterned floor with the Sun in the middle where the cup was kept until it was given to the Fisher King to keep safe.

The Glastonbury Thorn - When Joseph of Arimathea landed at Wearyall Hill, he struck his staff in the ground and from its sprouted the Holy Thorn, which blossomed immediately, during midwinter. The thorne is a type found only in Lavant and it flowers at Christmas. Because of the reformation the tree was cut down, a slip took root. Then recently vandals hurt the tree and another slip took root. Another of the holy thorn grows in the Abbey grounds.

The Michael & Mary Line - This energy or ley line runs through many of the churches dedicated to Mother Mary, Mary Magdalene, Saint Michael. The lines cross at three places in Glastonbury, the Abbey, Chalice Well, and the Tor or the bell tower for St. Michaels chapel.

The Tor - Archangel Michaels Chapel - Tor guards against the Fairies invading the area.

Thousands of people made pilgrimage to Glastonbury Abbey until the dissolution of the Monasteries.

Ammonite are everywhere on this site as it was underwater for millions of years. These ancient sea creatures died, were fossilized, surfaced when the water drained away from the land.

A symbol of stability, Ammonite is a protective talisman and wisdom keeper. This fossil can help you go deep within yourself giving you the opportunity to discover multidimensional of consciousness. The stone links to the goddess and the slow expanding spirals of evolution.

Place this stone over the 3rd eye, for clairvoyance and or over the heart to assist with infinite compassion.

Glastonbury is a beautiful place Theo and I look forward to seeing with my Mother and other friends. It is truly a sacred area filled with wonderful ancient and spiritual history.

I hope you enjoyed the video and the notes! Have a wonderful week! Keep your heart open and aligned with the energy of love! 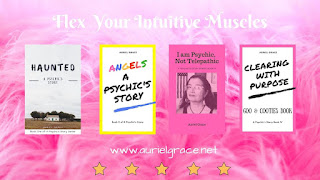